Amanda found herself with a lot of time and in need of a hobby.

For the first time in her life, she was living in a place where it was fall and the temperatures were still warm, with no snow in sight. So, she took advantage of it and signed up for a 5k/10k Run Series. She began running three to four times a week to train for the 5k. She fell in love with it.

After her first 5K, she began adding mileage during her training and began losing weight.

Fast forward to 2017, and she has completed a handful of half-marathons and is training for her first full marathon in spring 2018.

Amanda and Nick moved back to Maine in May 2017, after Nick completed his work project.

Amanda was worried about gaining the weight she had lost back, so she got in touch with Alexis Evans ’11 who owns Crossfit Decal in Oakland, Maine. 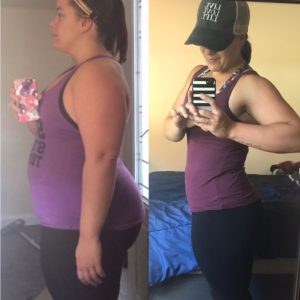 “It was there I fell in love with lifting weights on a barbell and constantly pushing myself to do things I never thought I could do,” she said.

In total, Amanda has lost 105 pounds.

“I have changed so much within the last year from the weight loss and fitness journey – and my career. I never thought I could be where I am today,” she said.

Looking back, Amanda is thankful for her time at Thomas College for getting her where she is today.

“My life would be completely different if I didn’t attend Thomas. Who knows if I would be married to Nick or would have ever gotten the opportunity to live in Texas for a year, fall in love with running, or start Crossfit,” she said. “I am so thankful for the opportunities at Thomas and how they have influenced the path that Nick and I have taken.”

From Berwick, Maine, Amanda studied psychology and criminal justice and was very involved with clubs on campus. She loved the welcoming and home feel of Thomas and loved having the opportunity to have working relationships with her professors.

“The ability to do an internship helped tremendously because I was able to intern with DHHS – Child Protective Services, which gave me experience to land my first full-time job at Crisis and Counseling before I graduated in 2013.”

Now, she is working as a supervisor for Day Treatment Services at Connections for Kids in the Fairfield school district. She works alongside fellow Thomas alumna Bobbi Pelletier ’11. 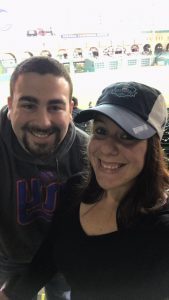 “Our job is working collaboratively with the school district, community supports, and Behavioral Health Professionals who work one-to-one with students who have behavioral disturbances to help them be successful in the academic setting.”

At Thomas, she also began dating her now-husband Nick.

“Nick and I lived in the same town growing up and met on the school bus in elementary school at Noble,” she said. “It wasn’t until he started at Thomas in 2011 that we started dating. He actually asked me to marry him in 2013 on the Thomas campus!”

Amanda and Nick now reside in Waterville and stay connected to Thomas.

“The thing I like most about Thomas is even though I graduated four years ago, I still feel a part of the community – whether it be for a 5K, family weekend, or just stopping by. I still feel as welcomed as I did when I was enrolled.”