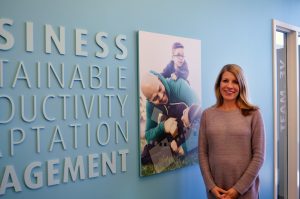 Deserae Dearborn ’03 grew up in Aroostook County in a town where most of the population worked for the paper mill.

She was raised in a lower-income family, and she was the first in her family to attend college.

“Although college was important to me, it was ingrained in my family as something that not everyone needed to do – so, I think I came to Thomas with a lot of uncertainty about what I actually wanted to do in my life,” said Deserae. “Thomas College provided a great opportunity for me to figure out my path.”

Now Deserae works at a Fortune 500 insurance company, Unum, where she manages 18 employees and a renewable goal of approximately $30 million each year as the Director of the Small Case Renewal Underwriting team.

“Since my role requires that I work with a large team to meet our goals and partner with all of our field offices across the United States, I can honestly say that every day is completely different from the day before,” she said. “My favorite parts of my role are oftentimes the most challenging – which are employee development and delivering on large financial goals for the company.”

She loves being a manager, and she feels very confident that she is on the right career path; but, when she arrived at Thomas, Deserae could not have predicted her current position.

“I grew up in northern Maine and had very little knowledge about reputable companies to work for outside of that area. In addition, my hometown thrived off a single industry (paper production), so I was also not very well versed on the various types of companies one could work for with a business degree,” she said. “When I first met with the Unum representatives at a local career fair, I initially had no idea what insurance companies were like – nor did I even know what underwriting was! However, the career fair allowed me to see all the options available to individuals with business degrees, and I was finally able to consider my future beyond what I had initially envisioned for myself.”

Deserae said even though she came from a small town, the close-knit Thomas environment made her feel right at home.

“When I arrived, I was surrounded by so many people who were just like me – ambitious, hard-working individuals from blue-collar backgrounds who were the first in their families to go to college.”

Deserae has some advice for those students: be proud of where you come from.

“Also, take advantage of everything you can while at Thomas – meet with your advisor, consider tutoring if needed, participate in extracurricular activities, join clubs. A fancy pedigree is not a prerequisite for having a great life during and after college!”