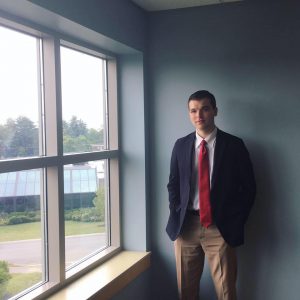 At 18 years old, Alex Knight ’18 had no work experience, no community engagement, no intention to go to college, and no real direction.

“When I entered college, I figur 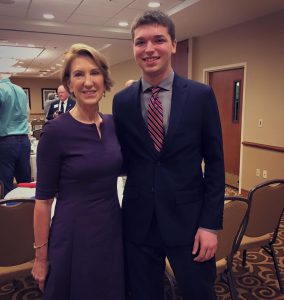 ed I’d just go to college and that’d be it for four years and then I’d get a job,” he said. “Instead, I’ve had amazing job and campus opportunities that have supplemented my classes here.”

As a high school senior deciding which college to go to, Alex was trying to choose between three colleges.

“When I got my Thomas letter that offered me a $10,000 per year scholarship, a guaranteed job after graduation, and it was only a half-hour drive, I was sold,” said Alex.

After visiting, he knew it was the place for him.

“The class sizes were perfect for engaged learning and classroom discussion.”

Alex’s dream job isn’t set in stone – maybe a campaign manager for a major political campaign or having his own campaign consulting firm or maybe even his own PR firm not related to politics.

What he does know is that Thomas has helped him try out his various dreams.

“Thomas has had a great impact on my life – not only through job connections, but personal ones as well,” he said. “The first impact was meeting one of my best friends, Daisy Provost. She’s also a Political Science major, and we became friends very quickly. She is the opposite of me, though. She is very outgoing; had several jobs prior to college; participated in Youth in Government in high school; and, maintained an incredibly busy daily schedule. We couldn’t be more opposite.”

Along the way, Daisy has given Alex encouragement and competition while setting his goals; it’s why Alex took a chance and applied for internships. For one of the internships, the interview was held right on campus.

“I had my interview and was offered the internship on the spot. I was told that I was only the third person he had ever hired on the spot, and the other two were interns from past years who also went to Thomas and became some of his favorite interns. Thomas helped me build this groundwork so that I could push my career forward.”

“I think Thomas College is a great place for getting students out in the real world,” he said. “It encourages engagement and internships. It helps give students the tools they need to succeed on their own. And, if they struggle after graduation, they walk the walk with the guaranteed job program by giving students every bit of help possible to get them on the right path.”