When David and Suzanne (Morin) Ronan met in Barry Farber’s Accounting class, little did they know what their Thomas College connection would hold for them for years to come.

“I was first in his class one semester, and in the next semester, Dave was,” recalls Sue. The friendly competition between the two of them led to romance – and their love for the College led to careers they never could have predicted. 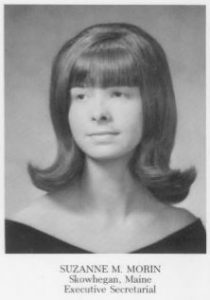 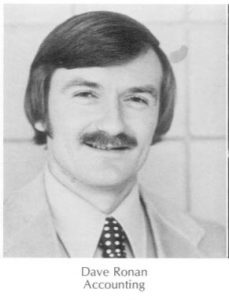 “After I graduated in 1976, Link Brown, who was the Director of Admissions at the time, hired me as an admissions counselor,” says Dave.

“And, I had already started working for [then President] John Thomas, Jr., as his secretary,” Sue adds. After moving to the West River Road campus from the previous Silver Street facility, Sue had an opportunity to work for Link Brown as well. She stayed with the College (including a stint in Financial Aid) until 1986, when she went to work for the Maine Teachers’ Association.

Dave and Sue married in 1972 and settled in Oakland, where they live today. Dave went on to earn his MBA from Thomas in 1982 and began working as the Director of Financial Aid, a position he held until 1990.

“When Link Brown left to work at Josten’s, he also created an opportunity for me there. I knew so many people in high schools from my time in Admissions that I was able to knock on doors to sell class rings for Josten’s pretty easily.”

Today, Dave and Sue spend their retirement years traveling in their RV, especially in Canada and states east of the Mississippi River. “We winter in Florida, and because of all these road trips, we’ve met people and friends from all over the country,” remarks Sue. The Ronans also enjoy their two grown children, a daughter, Cheri, and a son, Jonathan, who graduated from Thomas in 2008.

“We’re so proud to be Thomas alumni,” says Dave. “And, we recommend it to others all the time. It is the people at the College who make it so special – the students, faculty, and staff.”

“Thomas is a great place to live, to learn, and to grow,” Sue adds. “It was a great stepping stone for both of us – as students and as employees.”