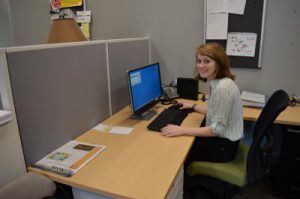 When Shelby Watson was in middle school, her teachers often asked her for help with computer problems. In high school, she continued to be involved with the tech team.

Even before Watson began studying at Thomas College, the VP of Information Services Chris Rhoda encouraged her to apply for a work study position within his department.

Watson, who is in her second year at Thomas but will graduate early in December 2016, has been the Office Assistant for Energy since she started at Thomas. Her job was to monitor the school’s energy usage, then collect and present the data. Last month, however, she was offered a full-time IT Support Technician job because of a vacancy within the department.

When Rhoda suggested Watson to apply, she thought he was joking because she is still a student. But after a few interviews, she was offered the job. She works 3:30 to 11 p.m. some days because of classes, and 2:30 to 11 p.m. on others to make up for it.

Watson said she is very excited for this opportunity and so far she enjoys it. Although she is just beginning her training, she said her job will include tasks such as: running lines in the ceilings to connect devices, providing software updates, being around at later hours to assist students and looking for rogue devices, such as Roku which can interfere with the Wi-Fi.

Although Watson has a love for computers, her first passion is music.

When she entered college, her goal was to be an artist manager and work in the music industry. She is a management major and entrepreneurship minor at Thomas.

Although Watson does not play any instruments, she loves to work behind the scenes.

“I love going to shows. I love meeting people who work with artists. I think it takes a special kind of person to do that stuff, so the people who I have met have been really cool. They love talking about their lives and what they do and they are excited when someone wants to know more about it.”

Last summer, Watson interned with Vic Firth Company, who manufactures drum sticks. She also visited Zildjian, that owns Vic Firth, which is a cymbal company. She said she enjoyed talking to people on the manufacturing side and on the sales side.

Watson said although she doesn’t know whether she will end up working with music or computers, this new experience in the IT Services department at Thomas will help her decide if she wants to work in the IT field.

From Skowhegan, Maine, Watson said Thomas College was not originally her first choice. But now, she has fallen in love with the College, its people and its opportunities.

“Faculty and staff care just as much about my education as I do – and that’s a really cool feeling. I think everyone is really approachable and if I have any questions or problems, everyone is always really willing to help. Even the students here – I mean there are people who aren’t nice everywhere – but I haven’t run into many students who aren’t friendly.”

“It’s a really exciting time to be at Thomas,” she said. “I love seeing the growth and changes.”

Watson said she is thankful for her new job.

“It’s amazing how fast I will be able to graduate, and I don’t have to worry about finding a job after,” she said. “I’m really grateful for all of the opportunities I’ve had at Thomas.”