Ashley Cust ’11, M.B.A. ’11 felt so overwhelmed her first month at Thomas College, she almost dropped out.

“The excitement of first arriving was wearing off, and the reality of this new journey was setting in,” said Ashley. “I doubted that I was smart enough. I worried that this was such a huge financial investment. What if I couldn’t finish? I have never stayed away from home before, not even off campus. Was I strong enough on my own?”

So, she met with an advisor about how to leave Thomas, and the advisor challenged Ashley to drop her most difficult class and give it another week or two.

“Once I removed the stress of the class, I could focus more on everything else, which I was doing well with,” she said. “I received a few good grades on some first assignments. I made friends easily and loved my roommate. I started to feel like I could do this, and I turned that into ‘I WILL do this.’”

Ashley said she is so glad she stayed (and passed that difficult class when she took it again later).

At Thomas, she was very involved on campus, including serving on the Campus Activities Board, as a resident assistant and an orientation leader, and working internships in both the Alumni and the Student Affairs Offices.

Ashley ended up graduating with her Bachelor’s and her MBA – she is the first in her family to do so. She said it made her feel very empowered.

She’s also recently engaged and is using her event skills she learned from the Campus Activities Board to plan her wedding.

When Ashley was looking for a college to attend, she had no idea what she wanted her future job to be. She didn’t have a lot of support.

“I moved around a lot as a young child, but I lived in Bangor the most. Like many, I was dealt a challenging hand,” said Ashley. “I learned many hard lessons early on, and it made me the person I am now. I couldn’t wait to be out on my own, but I literally had no idea what I was going to be when I grew up.”

Ashley found Thomas College through a program the high school offered to help match students with a college.

She was looking for a small school, something far enough away from home, with the option to live on campus. She also was interested in business and marketing after taking some courses in high school and liking them.

“When I found out that Thomas had an outstanding reputation as a business school and they offered a five-year Bachelor’s and Master’s program, I was interested,” she said. “I came for a tour and applied immediately after for early admission. I don’t think I even applied anywhere else!”

Ashley said her favorite memories at Thomas were with its community.

“A group of us playing American Idol in a common room together … let’s just say there was a lot of laughing. Or, getting a hot chocolate before an ice hockey game. And, dancing so much Cotton Eyed Joe … like so much dancing,” she said. “Also, successfully helping coordinate Deep Freeze Week, a talent show, and National Alcohol Awareness Week. These were all huge events that took so much planning, but the feeling of success at the end was amazing.”

Ashley said the biggest struggle with college was time management.

“I wanted to do so much. I learned to balance work and my time. I learned to say no when I needed to. I also learned the value of truly committing the time to something important – that project or community event – instead of watching TV with my friends. This skill translates to my work and daily life now, for sure.”

Ashley said what helps students get through the challenges of college are mentors. For her, that was Dean of Students Hannah Gladstone. 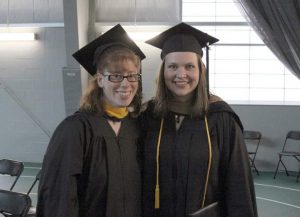 “Hannah saw something in me that I didn’t,” said Ashley. “She challenged me. I looked up to her – and I still do. I didn’t want to let her down with the responsibilities that she gave me, which helped me learn other skills – time management, research, and delegation.”

“The group work in class and projects best prepared me for real-world work. Working with people you may not be friends with or needing to pick up the slack, you can’t just cry to a teacher that your group is not being fair – because that does not fly in the workplace. You learn how to delegate,” said Ashley.

“By living on campus, I learned new social skills, independence, and how to make my own choices. I learned how to live on my own and the value of money and budgeting,” she said. “Finally, by being involved with campus activities, I learned skills about teamwork, managing time, planning, negotiating, and project management.”

Ashley still stays connected with Hannah. She’s happy and proud of her career and regularly uses her Thomas College experience in many aspects of her life.