Growing up, Cassie Contigiani ’19 had a best friend, Laura. Cassie and Laura played multiple sports together as kids. But in high school, Laura couldn’t play. She has an intellectual disability.

Laura was Cassie’s inspiration for bringing unified basketball to her New Hampshire high school. She wanted to give Laura – and other students like her – the chance to play sports competitively.

She set up a jamboree, and it became a huge success. Cassie and Laura even won the chance to go to the Special Olympics World Games in 2015 because of it.

“Having Laura – as big of a fan as she was – on the sidelines and knowing I could never be as big of a fan for her because she couldn’t play, I wanted to give her and the others in the high school the opportunity to compete,” said Cassie. “We had a lot of kids with special needs in our high school, and they never got that chance. I thought the jamboree would be cool because I’ve played in so many. I wanted to give them free t-shirts and put their names in a brochure to make them feel special.”

Since Cassie came to Thomas College, she still goes back home and holds a jamboree at her old stomping rounds during winter break. 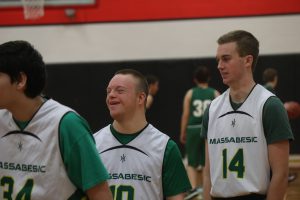 This past fall, Cassie tore her ACL playing soccer at Thomas. While going through painful rehab, she needed something else to focus on. So, she decided to plan a unified basketball event at Thomas College for Maine high school students.

Cassie also began a Special Olympics team at Thomas while organizing the jamboree.

Cassie said they hosted nine teams in a round robin play, had raffles, and games like chuck-a-duck.

“The athletes were all smiles the entire day, and it was just a big dance party!” said Cassie. “I can’t thank the Thomas community enough for allowing me to bring my hometown project to Thomas! The countdown to next year begins!”

Cassie, a sport management major, wants to be an athletic director and a coach someday. She graduates from Thomas College in May.