With just $2.75, she could take a subway ride from Tribeca to Chinatown in just minutes. Or, she could go see Little Italy or the Statue of Liberty. Moving to Central Maine for college was a huge culture shock. But during the past four years, she fell in love with the peaceful, slow-paced environment.

Growing up, Glory’s home life was very restricted. She was taught that a woman’s duty was to be in the home and that her aspirations to do anything outside of that — be a pilot, go to college, study biology — were not going to happen. Luckily, she was able to convince her family that she should go to Thomas and study forensic psychology. She said it’s her proudest accomplishment so far.

When asked how Glory found Thomas, her answer wasn’t typical.

“I actually meant to apply to St. Thomas Aquinas College — the direct step from my high school, Aquinas High School,” she said. “But, somewhere along the lines, my guidance counselor mixed it up and ending up sending an application to Thomas College.”

A few months later, she received her acceptance letter. She traveled up to Maine with her mom to receive her scholarship and check out the campus. 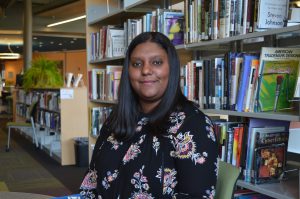 “When I saw the campus, I loved it. It was quiet. It was green. It was small. It was a culture shock.”

In the end, she decided to attend Thomas over other schools because she wanted to try out life away from the competitive, hectic lifestyle of the big city.

“I knew that Maine would offer me some insight into who I wanted to be. I would have enough space and time to figure it out,” said Glory.

At Thomas, Glory has been a science tutor, an EDGE tutor, and has interned for Maine Behavioral Health Organization, which turned into a job after the internship was complete.

A Forensic Psychology major with a minor in Science, Glory said her Thomas experience has increased her passion for a career in laboratory neuroscience one day.

“Thomas has inspired curiosity in me,” she said. “Sitting in Dr. Dickson’s class showed me how vast the brain is and how incredibly mysterious it still is in our current time.

“I can hear Professor Lepley saying ‘amygdala’ which is probably her favorite word, followed by a saying about there being a hippo running on campus as a way to remember the hippocampus, and before class ended, she’d always remind us that kids have great neuroplasticity!”

“Thomas provided me with passionate professors, and I wouldn’t have been inspired to pursue behavioral neuroscience if it wasn’t for them.”

Glory is happy with her experience at Thomas, and she is excited to continue her education after graduation with a Master’s in Criminology.