Daisy Provost ’18 is spending this semester in Washington, D.C., through Thomas College’s partnership with the Washington Center.

Daisy has hit the ground running – her internship with Iraq and Afghanistan Veterans of America has already given her opportunities to attend embassy events and to work on Capitol Hill.

“The Washington Center really gives students the reins. We are given the tools and, most importantly, the freedom to choose how we use them,” she said. “The Center also provides multiple opportunities to experience Washington outside of the walls of the institution.”

Daisy has dreamed of interning in Washington, D.C., since her first year at Thomas. 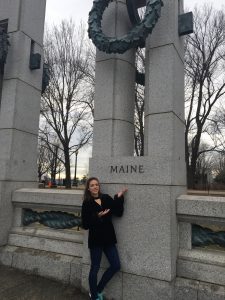 “I have fallen head over heels in love with D.C. and really do not want to leave,” she said. 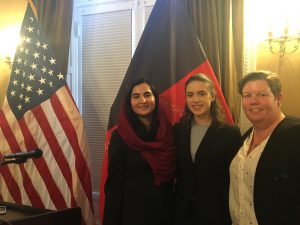 Daisy lived in Massachusetts until she was 10 years old and then lived in Houlton, Maine, a rural farm area, until she came to Thomas.

She said she found Thomas College through a JMG counselor in high school. She has enjoyed the small community here and is thankful for professors like John Majewski, who helped her get to D.C.

Daisy said her favorite adventure so far was attending the Reception to Honor U.S. Military Veterans and Gold Star Families at the Embassy of the Islamic Republic of Afghanistan.

“I was able to speak not only to the Ambassador of Afghanistan but also to the Female Political Council of Afghanistan,” she said. “Going into the military after graduation, it was wonderful to see the hidden, brighter side of the military. I was also able to receive advice from female captains from the Marine Corps who were in attendance.”

Daisy’s next plan after her internship is to serve in the military for 20 years.

“After, my dream job is to run for the Oval Office. President Provost has a nice ring to it,” she said.