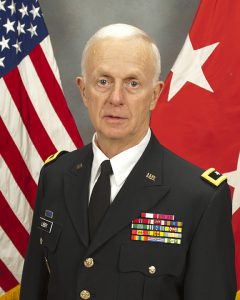 Commencement will take place Saturday, May 12, at 1:00 p.m. in the Harold Alfond Athletic Center at Thomas College. Thomas College is honored to announce Major General John W. Libby as this year’s Commencement Speaker. He will receive an honorary degree of Doctor of Humane Letters.

General Libby retired in 2012 after a 44-year career that ranged from service in Vietnam to leading Maine’s National Guard through eight years of war in Iraq and Afghanistan to working as commissioner of the Department of Defense and Veterans Services.

General Libby began his military career upon commissioning from the ROTC program at the University of Maine in June 1966 and held a variety of active duty command and staff positions in both Vietnam and Germany before joining the Maine Army National Guard in July 1975.

In addition to his many prestigious military accomplishments, he was involved with youth hockey for many years in the Lewiston and Waterville areas, and he has been a lifetime proponent of health and wellness for youth in the State of Maine.

First Lady Ann LePage will also be awarded an honorary degree of Doctor of Humane Letters at this year’s Commencement ceremonies, in recognition of her service and dedication to the people of Maine. 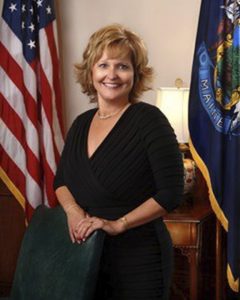 LePage is a passionate advocate for soldiers, veterans, and military families. In addition, caring for her mother heightened her awareness of elder care and its importance in the community, and her time spent volunteering during her children’s school years gave her an inside view of how she could best serve public education initiatives through her role as first lady.

The speaker for Honors Convocation, which takes place on Friday, May 11, will be Cary Olson Cartwright. Olson Cartwright is a Thomas College trustee and the Assistant Vice President of Corporate Social Responsibility at Unum. She joined Unum in May of 2004, but she began her career in television at WCSH where she worked in promotion, public service, and marketing. Prior to Unum, she worked in community relations at Fleet/Bank of America.

Olson Cartwright graduated from the University of Maine at Orono with a BA in Journalism and attended the Executive Management Program at Northwestern’s Kellogg School of Management.

Representing the Graduate Division will be Lindsey Allen. Allen is from Jay, Maine, and will be graduating with a Master of Business Administration degree. She currently works at the State of Maine in the Bureau of Real Estate Management, where she has been for the past two years following a successful internship. Allen plans to move into a career in agricultural business, where she hopes to advance the farming community and protect vital farmland in Maine.

About Thomas College: Founded in 1894, Thomas College offers undergraduate and graduate degrees in programs ranging from business, entrepreneurship, and technology, to education, criminal justice, and psychology. Its Guaranteed Job Program, the first of its kind in the nation, is built on students’ academic, career, and leadership preparation. Thomas is also home to the Harold Alfond Institute for Business Innovation and the Center for Innovation in Education. Money Magazine recently ranked Thomas 23rd in the country for adding the most value to their degrees, and data reported by the New York Times ranks Thomas in the top 15 percent of all college and universities in the U.S. for upward mobility of its graduates. For more information, visit wwwold.thomas.edu or contact MacKenzie Riley at rileym@thomas.edu or 207-859-1313.