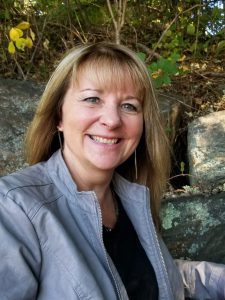 College can be tough – financially, mentally, and academically. Karen Restivo was a single mom when she arrived at Thomas College. Since she was from just 20 minutes away, she decided to live at home, and her parents helped raise her daughter Melissa while she attended classes.

“Despite being ranked number one in my high school class, my college options were limited under my circumstances,” said Karen. “I had always wanted to be a teacher, but a business-related degree was the only option at Thomas at the time.” (Thomas began growing its teacher certification program in the early 2000s, and it now has programs in both Early Childhood and Secondary Education.)

Things got even tougher for Karen at the beginning of her junior year when her parents lost their jobs at the local shoe manufacturer. The only job her dad could get was in New Hampshire, so they sold their house and moved.

Karen had to find a new place to live with her daughter, and she found an apartment across the street from Thomas. Her parents continued to help, and Karen took odd jobs to make ends meet, all while raising her daughter and going to school full-time for her accounting degree.

“Those were tough times. I had to make many sacrifices,” she said. “However, it was during this difficult time that I met Thomas resident students who became lifelong best friends. They are adopted aunts and uncles to Melissa,” said Karen. “I can’t tell you how many times these friends would ask to use my kitchen and bring a meal to cook up as they didn’t want cafeteria food that night. They always brought plenty of food – steak was not in my budget – and left extras for Melissa and me.”

During her senior year at Thomas, Karen went on many interviews and received an offer from a local manufacturer as an auditor. Three years later, Karen moved with her husband and children to Connecticut where Karen opened up a family home daycare.

“This allowed me to stay at home and raise our children while still earning income,” she said. “My accounting degree helped in operating a successful daycare. I also had the knowledge to do my own bookkeeping and taxes.”

While running the daycare, Karen went back to school, taking night classes in Early Childhood Education.

Once Karen and T.J.’s kids (four in total) were in school, Karen went back to school again for her Master’s in Education. She taught second grade and kindergarten for many years.

“During my teaching career, data analytics increasingly became important in the education profession,” said Karen. “My accounting background helped me to perform and understand data analytics unlike other teachers – and to use the data to instruct my students.”

Karen is happy she decided to begin her educational and life journey at Thomas.

“Thomas served as a springboard for both my husband and me in our professional and personal lives,” she said. “A Thomas education, combined with personal effort, hard work, and sacrifice, has led us to where we are today.

“We continue to stay in contact and socialize with the friends we made during our time at Thomas. During the past 30+ years, we have shared in each other’s joys and heartaches.”

“Here we all are, people from all walks of life with degrees from a small town in Maine who have gone on to successful careers,” she said.

Karen said she and T.J. instilled the importance of a college education in their four children to achieve their own levels of success. Melissa has her MBA and owns her own consulting firm; Jonathan is a lawyer and owns his own consulting firm; Anthony is a product web designer; Matthew is an engineer; grandson Micah is a freshman in high school; and, granddaughter Marleigh is a second grader.

“To think, it all began at a little college in Maine.”